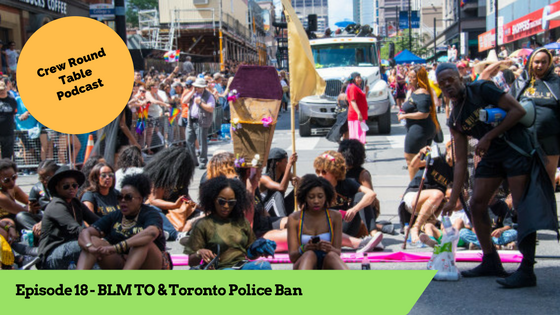 WARNING: Five straight white guys discussing a topic couched in Race and Homosexuality in 2017 – Can we possibly check our white privilege long enough to be unbiased? Listen and find out!

Black Lives Matter Toronto, [or BLMTO], had a sit in with roughly two dozen people in 2016, blocking the Toronto Pride parade route. This demonstration was over uniformed police involvement in the parade. The parade was brought to a standstill, until the Chair of the Pride organization signed a pledge to exclude Toronto police from the parade, and Toronto police withdrew. In 2017 a motion was passed at the Toronto Pride organization’s Annual General Meeting which bans official Toronto police involvement in ALL future parades. BLMTO claims this as a huge victory for marginalized communities.

In this show we examine who is “Black Lives Matter”, and what is the relation to BLMTO? Was BLMTO right to disrupt the parade in 2016, and force the uneasy examination of how police have related to the non-white non-straight members of our society? What exactly is Pride Toronto, and from where does it get funding? Who voted to carry the motion that Toronto Police are forever excluded from participating in one of the largest Pride parades in the world? And who called Canadian Prime Minister Justin Trudeau a white supremacist terrorist?

All this and more in another fantastic episode of “Crew Roundtable”!

We love doing the show for you, we hope you love listening, and we appreciate you sharing with your friends - THANKS!